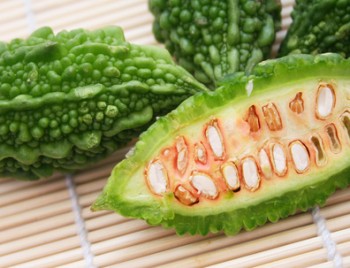 The bitter melon looks like a knobbly cucumber. It inspires curiosity. It tastes unlike anything you have ever eaten before or would have ever considered eating in the past. However, once you have eaten it and benefited from its rocket fuel-like effects, you learn to actually love the bitter taste, to even crave for it. Not a mainstream vegetable, you are more likely to find it in a specialty grocery store than a large chain supermarket.

The plant’s anti-diabetic properties are so widely known that it’s one of the first comments your grocer makes when you inquire about what it is and how to use it. This anti-diabetic activity stems from the fact that the vegetable contains a chemical similar to insulin that helps to reduce blood sugar levels.

Evidence has now emerged that the bitter melon could be a useful weapon in the battle against pancreatic cancer. In the United States, cancer of the pancreas is now the fourth-largest cause of cancer deaths. The prognosis today for pancreatic cancer patients is no better than it was 40 years ago.

Bitter melon and cancer of the pancreas

Now, scientists have reported that juice from the vegetable, also known as bitter gourd or kerala fruit, may offer protection against cancer of the pancreas by interfering with the ability of the cells in the tumor to use glucose, their principal energy source. The cancer therefore starves to death.

Led by Dr Rajesh Agarwal from the University of Colorado tested the juice on cultured cells and on nude mice. Administered over a six-week period, the juice inhibited tumor growth in mice by 60 percent. Kerala juice was also found to induce apoptosis, the process of programmed cell death, inhibit cell proliferation and activate certain enzymes.

Because the in vitro results were reflected in vivo, these results imply that the juice may be useful clinically1.

What else can bitter melon do for you?

The juice of Momordica charantia, the scientific name for bitter melon, has demonstrated a similar effect in cultured breast cancer cells2. Not only has it been shown to offer protection against cancer, it helps to fight diabetes3, prevent and treat malaria4, and protect the heart from inflammation5.

Does this mean I should try to acquire a taste for this strange vegetable?

Most definitely, yes, particularly as it offers a glimmer of hope in battling such a fiercely stubborn opponent as pancreatic cancer. This miraculous little vegetable helps us to fight cancer, diabetes and heart disease, three of our biggest known killers. Perhaps the best reason, though, for regularly consuming bitter melon, is for its ability to inhibit the formation of fat cells6! If you would like to try bitter melon for any of the above reasons but don’t feel like eating the actual fruit, you can always try bitter melon extract in the form of capsules.