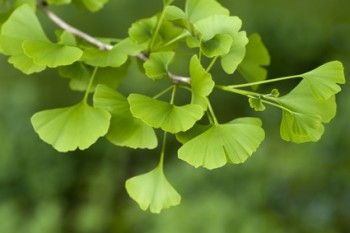 If you have a family member suffering from the devastating effects of Alzheimer’s disease, which is a form of dementia, you are well aware of the ways in which this disease impairs memory and causes changes in the personality of your loved one.

Unfortunately, dementia and Alzheimer’s disease are chronic, progressive diseases for which there is no known cure. The good news is that years of clinical studies demonstrate that taking daily supplements containing ginkgo biloba extract reduces the likelihood of developing these neurodegenerative disorders, as well as slows the progression of this debilitating brain disorders once they occur.

What is ginkgo biloba?

The ginkgo tree is basically a living fossil because it is one of the oldest surviving tree species in the world. This tree has short branches with leaves that form a fan. It is a fruit-bearing tree but the ginkgo fruit has an unpleasant odor and its seeds are poisonous. Native to China, this tree is also a familiar sight along the streets in the United States. Extract from the leaves of the ginkgo tree have been used to improve memory, and thinking abilities. In Germany and France, the treatment doctors prescribe most often for the treatment of Alzheimer’s disease, dementia, and other progressive diseases of the central nervous system is ginkgo extract.1

In his comprehensive review of the latest peer-reviewed clinical research of nutritional supplements effective in the treatment of dementia in the periodical Life Extension, Liam Hawkins, discusses several studies that support the uses of this herbal supplement. One German study found taking daily supplements of ginkgo biloba can slow the progression of Alzheimer’s disease by 25 months and the subjects that took daily doses of the herbal extract were significantly less dependent on their caregivers than those people in the control group2.

Two other reports of randomized control trials comparing the efficacy of Donepezil, a widely used medication approved for the treatment of Alzheimer’s disease with ginkgo biloba demonstrated that subjects who took 160 to 240 mg per day of ginkgo biloba experienced the same benefits as those that took the prescription medication3,4,5.

Another study conducted by a team of researchers from the National Institute of Neurology and Neurosurgery in Mexico discovered that ginkgo biloba has properties that serve to protect the nerve cells in the brain and it shows promise as a means of preventing Parkinson’s disease. Some of the ways that ginkgo extract prevents damage to nerve cells is by acting as an antioxidant, improving the blood flow, and maintaining a healthy chemical balance in the brain.6

If you want to improve your thinking, learning, and memory, while at the same time reducing your risk of developing dementia, Alzheimer’s disease, and Parkinson’s disease, make sure you take high quality supplements containing ginkgo biloba on daily basis.