The Health Benefits of Blue Corn 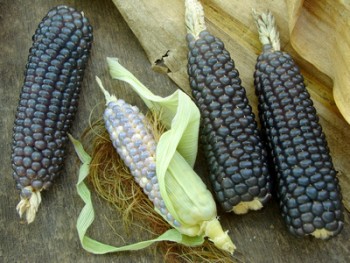 If you want to spice up your next potluck dinner, try turning up with a warm, fresh loaf of blue cornbread. No artificial coloring is required; blue is the natural color of Hopi maize, from which the meal is ground. Hopi maize is a variety of Flint maize and is native to the southwestern United States. Sweet in flavor, it is a dietary staple in New Mexico.

What are the health benefits of blue corn?

Blue corn contains 20 to 30 percent more protein than its white or yellow counterparts.
Blue corn has a lower glycemic index (GI) than other types of corn. The GI of a food is a measure of how quickly blood glucose levels go up after consuming the food. Glucose itself has a glycemic index of 100. Foods with a low GI number release glucose into the bloodstream more slowly, making it easier to maintain stable levels of circulating glucose.
Like all corn, blue corn is gluten-free.

Blue corn and the fight against cancer and diabetes

By blocking the expression of cancer-causing genes, blue corn may eventually join the arsenal against cancer. It has been shown to suppress the development of colon cancer cells in rats. Moreover, rats fed a diet supplemented with purple corn pigment were less likely to develop obesity and diabetes than rats fed on an ordinary diet.

Blue corn – there is a downside

Eating too much corn of any color may produce post-prandial spikes in blood sugar and corrupt insulin function. Corn oil is also a source of omega-6 fatty acids. This in itself is not bad for you, omega-6 is preferable to saturated fats. However, an excess of omega-6 can mess up the health benefits of consuming omega-32.

Making the blue corn risk/benefit analysis work in your favour

If you have trouble maintaining your desired weight or are concerned about your omega-6 to omega-3 ratio, then going mad and eating blue cornbread every day is probably not a good idea. Then there is the whole GMO food controversy. While GMO-free blue corn is easier to find than is the case with other colors of corn, it is currently not possible to be assured that what you are getting is not free from genetically modified organisms. If you are worried about this, you are better off seeking out a blue corn supplement for your anthocyanins, or go back to the fruit counter and pick up some blueberries.