Trying to Keep the Flu Away? Get More Vitamin D 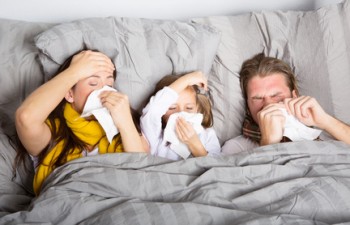 Most people have heard the old saying “an apple a day keeps the doctor away,” but did you know that you could potentially keep the flu away by taking a vitamin D supplement?

A group of Norwegian scientists observed that most flu outbreaks throughout history occur when the amount of sunlight is at its lowest. Since one of the ways the body makes vitamin D is through exposure to sunlight, the research group tested their hypothesis that low levels of this vital nutrient might play a role in the severity in flu epidemics and pandemics.

The flu and vitamin D

The study, published in the International Journal of Infectious Diseases¹, reviewed monthly and weekly incidence rates of influenza along with the number of people who died during the same period. The research group focused on data collected during flu outbreaks in the United States, Norway, Sweden, Japan, and Singapore. The scientists then determined the amount of UVB light, a part of the light produced by the sun, during the time of the outbreak. Finally, they examined whether the amount of UVB rays had a relationship with the breadth and severity of the flu outbreak.

The authors of the study found that the most intense flu outbreaks occurred during the winter months in areas where sunlight is the lowest and people produce low levels of vitamin D. They also observed that influenza epidemics and pandemics subside during the summer when people have increased exposure to sunlight and make more vitamin D. The scientists concluded that vitamin D deficiency likely contributed to the severity of the flu.

The role of vitamin D in flu prevention

According to the National Institutes of Health², vitamin D boosts the immune system, which allows a person’s body to fight the viral infection that causes flu. In essence, since it acts as a natural antibiotic, vitamin D can also prevent the secondary bacterial infection in the lungs that leads to so many flu-related deaths.

How you can use vitamin D to fight the flu

While the primary source of vitamin D for most people is through skin exposure to sunlight, you can decrease your chances of catching the flu by making sure you get enough of this essential nutrient in your diet. Some sources of dietary vitamin D include the following: fatty fish, such as tuna; vitamin D fortified milk, juices and cereals; beef liver; mushrooms, and cheese. If you do not have much of these foods in your diet, you can take a vitamin D supplement to avoid having too little of this essential flu-fighting nutrient.