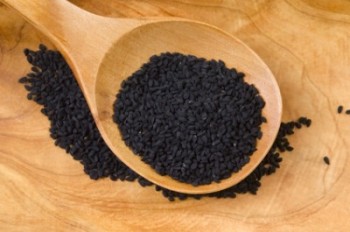 Nigella sativa is an annual flowering plant that grows in southern and southwest Asia. Once the delicate, pale blue flowers have finished blooming, a large seed pod develops, containing a large number of tiny seeds known as black cumin. The seeds are widely used as a spice, appearing in Bengali cooking and are particularly noticeable in naan bread. Black cumin is also used in Bosnia, where it is used to flavour pastries that are often baked in celebration of Muslim holidays. The seed’s many uses have earned it the Arabic endorsement, “seed of blessing.”

We know that black cumin seeds were in common use as far back as at least 740 B.C. because they are mentioned in the Old Testament, believed to have been written around that time. Abu Horayrah (AD 603 – 681), a companion of the prophet Muhammad, wrote about black cumin almost 1,000 years later, praising it as the “remedy for all diseases except death.” Black cumin was also found in the tomb of King Tutankhamun around 1,400 years ago. Here, we look specifically at the potential for using the spice to relieve the symptoms of food allergies.

The symptoms of food allergies include oral allergy syndrome (itching and burning around the mouth, etc.), vomiting, diarrhea and atopic eczema (the word, “atopic,” means sensitive to allergens).

Different allergens affect people at different ages. The most prevalent allergens for infants and young children are milk and eggs. Most kids outgrow these allergic reactions by the time they start school. Other allergies include adverse reactions to foods like soy, peanuts, shellfish and gluten.

The science behind black cumin and food allergy relief

Duncker1 and colleagues investigated a specific component of black cumin, thymoquinone. This is a small molecule hydrocarbon ring with functional groups attached in four out of six possible binding sites. Scientists believe that thymoquinone exerts its effects by binding to a specific type of opioid receptor, known as the mu-opioid receptor. These are specific proteins located on the surfaces of cells in the brain, spinal cord and intestinal tract.

Four separate treatments were offered to mice that had been previously sensitized to albumin, a common protein found in eggs. The mice were pretreated with one of: an extract from Nigella sativa, thymoquinone, kappa-(U50’4889), or a mu-opioid receptor agonist (DAMGO), before being intra-gastrically challenged with ovalbumin.

All four pre-treatments were found to reduce clinical diarrhea scores. This effect was reversible by pre-treatment with a mu-opioid receptor antagonist. The results suggest that opioid receptors may be a potential target for treatments for food allergies and that Nigella sativa extract could be a promising candidate in this area.

What do these results mean for you?

If you suffer from food allergies, are a parent of a child with food allergies or just someone who wants to try black cumin for the many other positive health effects experienced by your ancient ancestors, you can try adding it to your cooking.

If, instead, you would prefer to have black cumin in a purified and concentrated form, you can try a dietary supplement with black cumin extract.