Thumbs Up for the White Potato! Increase Potassium Intake Without Gaining Weight 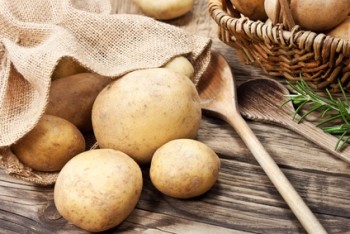 We are punching the air with delight here! Having been brought up to believe that potatoes are the work of the devil and will only make you fat, it is too marvelous for words that scientists are now telling us that potatoes, especially white potatoes, are a must-have in our diets. The reason for this is that they appear to increase potassium intake in both adults and children1.

Potassium is the seventh most common element on the planet, making up 1.5% of the Earth’s crust. Paradoxically, potassium is apparently what is called a “shortfall nutrient” in public health circles. Did you know that 97% of Americans do not have an adequate potassium intake? For something that is essential for nervous system function, blood pressure control and kidney health, among other things, this is really surprising. Most of us are also similarly deficient in dietary fiber, vitamin D and calcium.

On the Periodic Table of the Elements, potassium occupies the same column as the other alkali metals, sodium, lithium, rubidium, cesium and francium. Do you remember your science teacher demonstrating how sodium metal fizzes when dropped into a bowl of water? Potassium does that too, only more so. That is why you weren’t allowed to do the experiment yourself.

According to research recently reported at the 2013 Experimental Biology meeting, each kilocalorie of white potato consumed results in an increase in potassium intake of 1.6 mg among adults and 1.7 mg in children between the ages of 2 and 18 years. Bananas, on the other hand, which are widely regarded for their potassium content, provides far less potassium in a calorie-per-calorie comparison.

These data are consistent with work published in February 2012 indicating that potatoes lower blood pressure in people with hypertension and obesity without increasing weight2. In this study, purple, rather than white, potatoes were used. According to Korean folklore, purple potatoes actually help people lose weight. The average systolic blood pressure in these experiments decreased by 3.5 percent, while the average diastolic BP dropped by 4.3 percent in the purple potato people.

Hints for increasing your potato consumption without gaining weight

By following a few common sense rules, it is possible to eat white potatoes and increase your potassium intake without expanding your waistline. As most of us would probably admit we have known for some time (although we would never admit it), the main culprit in weight gain from eating potatoes is the stuff we put on them. This rules out butter and sour cream. We should also know better than to dip our freedom fries in deep fat.

“How can we make them fun to eat?” I can hear you screaming. Oven-baked fries with a light spray of olive oil and a scattering of rosemary leaves are yummy. Try roasting garlic and spreading it on baked potatoes. Add a little low-fat milk to mashed potatoes. Once you get started and get the creative juices going, it will be hard to stop!